We provide distinctive cultural experiences and locally flavored activities for clients who like visiting off the beaten track places: opera and ballet, music, parks and gardens, Jewish heritage, World War II history, sports and others.

In the morning you will go to the Big Choral Synagogue, an architectural monument of importance to all of Russia. The Synagogue is located in the so called Kolomna district of St.Petersburg, a thriving Jewish neighborhood in the past. Then you will visit Museum of Ethnography. Its exhibition “History and Culture of the Jewish People on the Territory of Russia” featuring more than 2400 pieces, traces the Jewish culture’s history, from the epoch of biblical Patriarchs to the period when Jews lived within the Pale of Settlement, a term used to describe Imperial Russia’s Western border region that was once populated with poor shtetls.

This tour is meant for those who are interested in the history of World War II. It is devoted to the 900 days and nights of the Siege of Leningrad, September 1941 – January 1944, when the city was completely cut off from the rest of the country by the Nazi troops. Not only did the city survive, but victoriously crushed the enemy. You will visit the most important monuments devoted to the unprecedented heroic defense of Leningrad. First you will visit the Monument to the Heroic Defenders, where you will see artifacts and documents of the period and a unique documentary film, made during the siege. Then you will proceed to the Memorial Museum of Leningrad Defense and Siege, founded in 1942, but closed in 1949 during Stalin purges and reopened in 1989, which contains a precious collection of over 35,000 original documents and possessions of townspeople and soldiers. After the museum you will go to Piskarev Memorial Cemetery, the largest in the world cemetery of the victims of World War II, where more than 500,000 people are buried in mass graves. 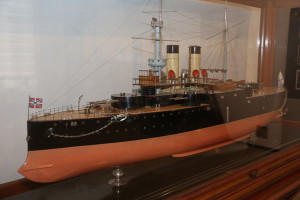 The tour will take you to the legendary Cruiser Aurora, launched in St.Petersburg in 1900, and then it was the largest cruise in the world. Throughout its history it participated in all the major military operations, including the defense of Leningrad during World War II. The cruiser is also closely associated with October Revolution of 1917, when the cannon of the ship signaled the beginning of the revolution by a blank shot. The visit to the cruiser will be followed by the tour of the Naval Museum of Russia, one of the largest maritime museums of the world with a collection of over 700,000 exhibits, including the Russian Navy’s “grandfather”, the boat of Peter the Great; models of Russian ships, samples of weapons, marine paintings, etc.
Visit to Cruiser Aurora is not possible at the moment as the cruiser is taken to the shipyard for restoration.

You will begin this tour with a visit to the palace of the outstanding Russian family of Counts Sheremetevs, built in 1750, where you will see elegant reception rooms and the unique collection of musical instruments counting 3,000 exhibits. Then you will proceed to Rimsky-Korsakov Apartment Museum, where he spent the last fifteen years of his life, from 1893 to 1908, and composed eleven of his fifteen operas. All private belongings, as well as the furniture, have been carefully preserved. After an independent lunch in local café you will go to Alexander Nevsky Lavra Necropolis, where Tchaikovsky, Rimsky-Korsakov, Mussorgsky, Borodin, Glinka and other famous Russian composers are buried.

Parks and Gardens of St.Petersburg # 1

In the morning you will drive to Peterhof, a summer residence of the Russian Royal family, where you will walk through the formal Upper Garden, framed by borders and hedges, see the vegetable garden of Peter the Great and explore the wooded Lower Park, with its four fabulous cascades and over 150 various fountains. After an independent lunch in a local café you will go to Pavlovsk, the former summer residence of the Russian Emperor Paul I, where will have a walk through the largest landscaped park in Europe with numerous temples, colonnades and bridges, and visit the Rose Pavilion, where the banquet devoted to the victory of Russia over Napoleon took place.

Parks and Gardens of St.Petersburg # 2

You will start this day with a visit the Botanical Gardens, founded by Peter the Great in 1714 as a source of medicinal herbs and exotic plants. At the moment the Botanical Gardens boasts some 7,500 plants from all over the world. Then you will go to the Summer Gardens, one of the few places in St.Petersburg where one can feel the atmosphere of Peter’s time. It was laid out in 1704 and preserves its regular planning. It was Peter the Great who commissioned marble busts and statues from Italy in order to make the garden of his summer residence as beautiful as the famous gardens of European Monarchs.
Approximate duration: 4 hours